A world connected to many other worlds, including our own, by unpredictable and sometimes transitory portals, Portal Bound is both the name of an incomplete story (never posted) in the world and the world itself.

You can find the beginning of the story excerpted on Patreon.

okay, I’m a little behind on this…

Things marked with a * are free for everyone to read.

Stories
The Library of Secrets There are two places in the Empire that are often called The Library of Secrets…
A Fairy Tale They said she was crazy….
The Expectant Wood: Chapter 22 — Learning and Knowing “She… Alyea… she ran off.  She didn’t like me?”
The Portal Closed (A Beginning)*
Cataloged *
The Trouble With Bogong Island – Tales from the Trunk

From Eseme: An Excerpt from Other Duties as Assigned

In World History, the Aunt Family ‘verse parallels our own. The magic that exists here is mostly personal magic – it can change a single person’s timeline, or a single family’s, but rarely the world’s.
(Yes, I know that there are ways that A can change B, but this is not so much an AU as it is a world in which personal problems sometimes have unusual solutions).

The Aunt Family themselves… their history is lost in myth and fuzzy retellings, and every branch of the family tells it a little bit differently. What we know is that, at some point, the strong personalities in a long-ago family decided that their thin but interesting powers could best be handled — and family feuds avoided — if they kept the power in the hands of a single childless woman.

And as the family grew, so did the power.

Many centuries ago — nearly a millennium — portals opened between an untouched planet and several other worlds, and a few people came through, a farmer and his family.

You said that already, Lyn.

That farmer’s settlement became the basis of the capital town. He brought through others from his home village — which was in chaos at the time — and, when the portal opened somewhere else, brought through those people, too.

Other portals formed their own settlements. Over time and trade and more than a few battles, over quests by Key-bearers from other worlds and mighty adventures, the settlements on these islands/small continents settled into a few nations.

The nation our story is set in became a monarchy with a very strong bureaucracy . Which was fine for quite a while.

And then the Crown Prince vanished.

This entry was originally posted at http://aldersprig.dreamwidth.org/1337879.html. You can comment here or there.

As the title of this setting suggests, the Dragons Next Door world has Dragons.
It also has quite a few other magical sentient races: ogres, harpies, pixies, tinies, elkin, and centaurs, to name a few.

In addition, it has a deep and broad human population, very similar to the real world (it’s an Urban Fantasy setting, after all) and then dweomers, who are humans with magic, or at the very least humanoids with magic.

For a very long time, these races lived primarily separate lives with their own civilization. There were dragon nations and pixie towns and Centaur Isles and so on; the elkin had a remote mountain nation that spoke to no-one except the Tinies and the harpies, for instance.

The Tinies were the only exception to this rule: Tinies have always lived everywhere.
Only recently – since the 1930’s – have the races begun to actively mingle.

(I wonder if this matches the previous notes on Smokey Knoll. Shall have to check).

Portal Bound
The continent that Portal Bound takes place on has only one sentient race: humans.

On the other hand, because of the portals, there are two factors at hand here:

* what counts as human varies slightly from dimension to dimension, and so there are those that are very nearly elves or fairies or such (or Klingons or Romulans) in appearance
* because of the broad spread of the portals across the worlds in all these dimensions, the humans come in all ethnicities.

Sometimes, if a portal stays open for a particularly long time, a city will end up with a small enclave of people of a particular ethnicity and world-origin.
More often, however, people come singly, and thus they find a place and settle as they can, bringing their own traditions but integrating into the massive whole.

This entry was originally posted at http://aldersprig.dreamwidth.org/1336994.html. You can comment here or there.

2. Geography
Desmond’s World
Oops, I already covered a bunch of this in the first post.

The City Desmond lives in (100 words to anyone who names it something that fits with the names that I like and another 100 to someone to name the nation) straddles the river leading to the ocean.

It’s definitely got high ground (High Street), mostly to the north of the river, and lower ground, which sometimes floods, to the south of the river. The river directly to the south is all parkland, designated so 100 years ago when a leader ordered the slums torn down so that the houses on the north side did not have to look at them.

This, of course, just moved the slums a bit more inland, but there’s a nice wall of trees now, and the houses bordering that parkland are high-rent for the area.

The City office and school are on the north side of the river. Desmond grew up on the south side.

The main city of needing-a-name is settled into an oxbow in the river of also-needs-a-name. Inspired by the Mississippi, the river has moved several notable times over the centuries since the first buildings were hewn from the forest all around.

(The capital we’re discussing is just on and around about where the left end of the upper wild-rice roads are on the above-linked map.)

The river runs through a flattish forest area, making its way towards the sea. Much of the land in the area is still forested, with small townships growing up among the trees.

This entry was originally posted at http://aldersprig.dreamwidth.org/1335387.html. You can comment here or there.

1. Introduction
B. Portal Bound
Many centuries ago — nearly a millennium — portals opened between an untouched planet and several other worlds, and a few people came through, a farmer and his family.

The main nation of this story is run by a bureaucracy that balances on the mandate of the long-missing Prince. It runs well enough, this nation, and the bureaucrats like it that way.

This entry was originally posted at http://aldersprig.dreamwidth.org/1333342.html. You can comment here or there.

March is Worldbuilding Month! Leave me a question about any of my worlds, and I will do my best to answer it! (I need more questions, guys)
🌏
This twelfth one is from B: have you figured out the naming rules for that one world?

So “that world” is Portal Bound, which there is a map of here. The basic premise is that it was originally discovered – i.e., this continent at least had no human life on it – by a family who found a portal in their back yard. They were handwave-Scandinavian at the moment.

“When in Rome, shoot Roman candles.” The naming thus ends up being an interesting combination.

Usually, children are given names of the parents’ culture, if the parents happen to have a culture in common. Children from mixed-cultural-heritage families sometimes alternate, so you might end up with Lars and Yuki, for instance, as brother and sister. Ancestors’ names are common, although not normally parents’ names.

If the parents are themselves very mixed-heritage or feel no particular connection to the heritage or world they came from, then the children are often named Scandinavian names, as those are still the most common in this world – often they are then named after historical figures, Princes or Kings, Queens or Princesses or Governors from times past. It is considered ill luck to name a child after a living person.

(In a family where there are many siblings having children, this can lead to battles about who gets to name their daughter after Grandma Yuki or Grandpa Lars.)

As for family names, most people use a patronym or matronym – sons follow the father’s line, normally, and daughters the mother’s line, although a fatherless or motherless child will go with the extant parent. So Larssen or Yukidar, or Larsdar or Yukisen.

This entry was originally posted at http://aldersprig.dreamwidth.org/1293200.html. You can comment here or there. 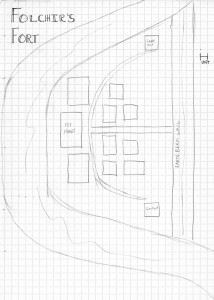 While I was looking up maps, I encountered the premise of “friday 5-minute maps.” And, while nobody had been active on any of the tags in a while, I thought it looked fun.

This stands (loosely) where on my big map project there is a red star – ‘cept it’s been long enough (approx 1500-2000 years ago) that the river has moved. The bigger houses are meant to be almost longhouse style: communal big buildings thrown up quickly, because shelter was needed.

(I gotta say, some of the maps in the Google Plus community are amazing for 5 minutes!)

Now taking suggestions for the next few fridays worth of maps.

This entry was originally posted at http://aldersprig.dreamwidth.org/1094303.html. You can comment here or there.

…no pictures today because I made a muck up of trying to make the long rivers more curvy. <.<

Tomorrow I will trace the map and start clean with shiny new curvy rivers.

And some lakes, preferably ones that don’t look like a troll-head. Those old troll dolls with all the hair.

I keep forgetting you don’t need visible obvious rivers feeding into a lake (visible on a continent-scale map, that is). It could all be streams.

(pre-curvied drawings can be shown here – https://twitter.com/lynthornealder/status/722939920877273088 – that at least decide placement of the rivers in broad scale)

Edit (again): Please ignore the awful scribbles that are the rivers. This is for basic city and border placement.

Red is our story country, at least the beginning of it. Blue is Second Country and spills onto the large island below and 1/5 of the small islands. Third country is the other small islands and the last 2 largish islands. (Islands not visible on this map)

This entry was originally posted at http://aldersprig.dreamwidth.org/1092832.html. You can comment here or there.