Now I’m not saying this is how it happened, and I’m not saying it didn’t happen that way. If you look at the journals for that day, you don’t see anything that interesting. But a few tipsy whispers say otherwise.

Asta’s journal from this particular October, 1968:

Met a wonderful woman, Anthony’s great-grandmother Margaret. Shall have to get together with her sometime to exchange recipes – and perhaps knitting patterns.

There was a bit of a scuffle at the wedding –

For just $1, you can read all the Patreon stories!

This entry was originally posted at http://aldersprig.dreamwidth.org/998825.html. You can comment here or there. 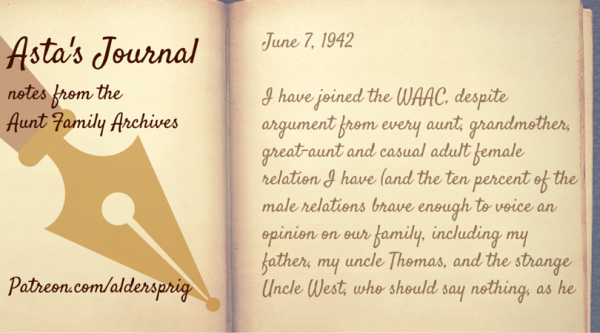 A Patreon bonus, written because I conceived of it while working on another story & it explained a few things about Asta, free for all readers~

This entry was originally posted at http://aldersprig.dreamwidth.org/992627.html. You can comment here or there.

I have joined the WAAC, despite argument from every aunt, grandmother, great-aunt and casual adult female relation I have (and the ten percent of the male relations brave enough to voice an opinion on our family, including my father, my uncle Thomas, and the strange Uncle West, who should say nothing, as he is also enlisting).

I have joined for several reasons, not the least nor greatest of which is to remove myself for a time from the authority of said aunts, grandmothers, and other such relations. The more important reasons, however, are patriotic and, as always, familial: I cannot stay home while nephews, brothers, and cousins are enlisting, and I have no children, no husband, and, if the family has anything to say about it, no prospects of either. So I will help serve our country, and I hope perhaps in doing so that I will be able to provide some auxiliary help to our men in uniform, as they say.

The family is angry, of course, because they have rested all of their hopes on me. Ardelia is already married. Suzanne is already on her second child. And while Beatrix is not yet married, nobody believes she can spark enough to light a candle, much less carry the family.

If I am to be aunt, as it seems I will be, I will make certain the family does not repeat that mistake. There are so many female children. They should all know if they can carry the weight, long before it comes to the point where they are running away to join the army…

Asta looked at the pile of books, then at the broken lightbulb spread across the table. She looked back at the books, and then, finally, she looked at her cousin. “It has to be done, Maeve.”

“You know what the Humpty Dumpty rhyme really means.”

“I know.” Asta bit her lip. “Once something is done, it is done. Once someone is cursed, he is cursed. Once a vow is vowed, it is set in stone.”

“And yet I need to break the vow, un-curse the curse. I need to put Humpty Dumpty back together again.”

“And what makes you think you can succeed where all the king’s horses and all his men could not?”

Asta lifted her chin. “Because I am the Aunt.”

This entry was originally posted at http://aldersprig.dreamwidth.org/841654.html. You can comment here or there.

I don’t have demons in any of my settings, so this is misc-verse

When Evangaline’s Aunt died, it fell to her to clean out the old house where her Aunt had lived and, before her Aunt Asta, her Aunt’s Aunt Ruan (family history stopped there, but Evangaline felt as if, if she tracked it back far enough, there would be an unbroken line of Aunts back into pre-history). As a childless Aunt herself, she accepted that the house would now become hers, but not that she needed to keep the piles of accumulated auntieness that filled it.

Tables were put out on the lawn, yard sales and freesales advertised, and Eva took two bright, sunny weekends to pull out of every nook and cranny, every eave and basement cabinet, every shelf and wardrobe, every piece of her ancestral Aunts’ lives.

Some she kept – the kitchen table was her self-imposed space limiter for knick-nacks, the living room itself for furniture (except for the bedrooms. The bedroom furniture she could keep for now; there were seven bedrooms in the old place, some barely bigger than a closet. For an unmarried aunt, it seemed excessive). The rest, despite family uproar (“If you think we should keep it, you’re welcome to come buy it at a family discount.”) went away.

Alone in a much-emptied house, Evangaline drank her tea and studied what remained. Four tea pots and one kettle (she’d gotten rid of seven pots!), one wide, shallow scrying bowl. Three little muslin dolls she’d been afraid to throw out – those would go back in their silk wrappings in their oak casket, and hope that Aunt Ruan or her Aunt had just liked dolly-making. One blue glass rose, and a beautiful matching vase. Three sets of tarot cards.

She’d sent the other six tarot sets to the sale, but these three had felt different to her fingers, tingled wrong, especially the oldest set, the one that was clearly hand-painted, in its oak box.

She’d finished her tea and her take-out pizza, so now was as good a time as any to figure out what it was about them, why these cards in particular had called her. She tipped the case out onto the table, letting the cards fall where they may.

The first thing she noticed was that this was not, exactly, a Tarot, or if it was, it was an interpretation she had never seen before. The second was that the tingling sensation was getting worse. The third was that the cards were moving on their own.

The woman on the card at the front – a blue-skinned woman, tall, dressed in medieval clothing and standing on the edge of a precipice – winked deliberately at Evangaline. Her card was labeled “The Fall,” and it looked like a long one.

As she winked, her card moved to cross another one – a deep, red-lit cave, with two eyes glowing out from its depths. “The Beast,” its caption proclaimed.

Evangaline’s hands hovered over the cards, loathe to touch them but drawn to see what the rest of them were. She reached for another one, just a tiny corner of lush greenness showing under the Beast.

“No, no,” the blue woman tut-tutted. “No, child, one reading at a time.” The cards burst into flames at “time,” the whole table of family heirlooms lighting on fire. “One at a time,” the voice repeated, as Evangaline jumped back from the heat.

The flames died down and vanished, the cards tucked back into their case. On the table, one teapot – that nearest the cards – was covered in soot. Nothing else was harmed.

Carefully, very carefully, she closed the card case and put it in a drawer. Her Aunts’ relics were going to require some careful handling.

This entry was originally posted at http://aldersprig.dreamwidth.org/151952.html. You can comment here or there.