This comes after Fox Hunt(Saturday) and The Hunt Continues (Wednesday), Chase the Fox Part I (Wednesday – the following Saturday), and Part II (The next Wednesday and Thursday).

It was still such a bad idea, such a dumb idea, but George took the offered night in the hotel — the nicest the area had to offer, he was fairly certain. He cleaned himself up, shopped at the overpriced gift shop, slept solidly, and left the next day looking like a travelling businessman rather than a backpacking kid.

The look on the woman’s face haunted him. She’d nearly been licking her lips. George had been on the end of hungry women before — but never one who acted quite so much like he was the perfect prey.

Well, he was done running for her. He hopped a train to the nearest border crossing, paying with cash, and spent some quality time in the train bathroom forging papers. END_OF_DOCUMENT_TOKEN_TO_BE_REPLACED

The first part of the story: Fox Hunt
The second part: The Hunt Continues
The First Continuation, part of @dahob’s commission: Chase the Fox Part One

And yet more Fox! Chase the Fox Part II

Hitchhiking had gotten old pretty quickly. George hadn’t thumbed a ride in years, not since his college days, and he found that all the things that had made it so unpleasant back in Maine were almost identical in California — the road splashing and the traffic noise, the hours you’d go by with nobody picking you up, the odd juts out of your way when you did get a ride, the talking. The endless uncomfortable chatter….

A Patronage of just $1/month will give you access to everything posted on Patreon.

Want input into the story prompts? A Patronage of $5/month lets you prompt in the monthly prompt calls. For $15/month you get your own personal story!

This entry was originally posted at http://aldersprig.dreamwidth.org/969392.html. You can comment here or there.

July’s Patreon Theme was “More, Please;” the prompt call covered anything my $5 readers would like to see continued.

A Rescue in Kind, a story of Daxton-and-Esha continued
The Hunt Continues, a story of fox hunting in Tir na Cali continued
Down, Down, Down, more of Doug and the Basement – free for all to read!

I also posted a couple other stories on Patreon:
Last Bid, a story of a worried slave in Tir na Cali
The Queen’s Councillor, a story also of Tir na Cali and a Queen worrying her people.

Check them all out here!

Not a member yet? For $1/month, you can read all patron-only stories.
For $5/month, you not only get access to the prompt calls, you will put my Patreon over the next Milestone Goal and open up a monthly serial!

This entry was originally posted at http://aldersprig.dreamwidth.org/967026.html. You can comment here or there. 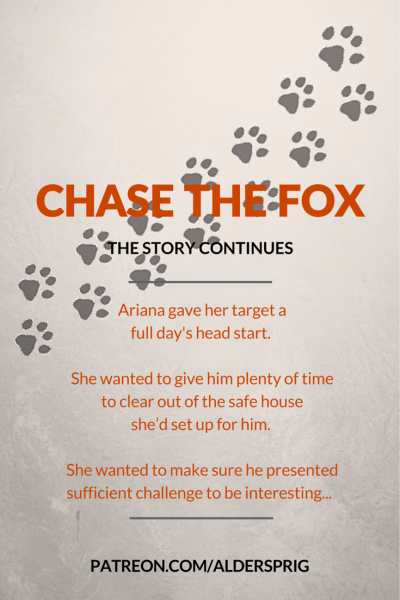 This entry was originally posted at http://aldersprig.dreamwidth.org/966752.html. You can comment here or there.

The Hunt Continues, the July Patreon microstory, has been posted:

George sidled up to the clothesline, checking the lay of the land. Nobody around; he could hear the household slaves in the kitchen, gossiping around what Her Ladyship had done.

They ought to be more careful, he thought dryly; someone might overhear…

A Patronage of just $1/month will give you access to the rest of the Patreon stories!

Want input into the story prompts? A Patronage of $5/month lets you prompt to your heart’s content and for $15/month you will get your own personal story!

This entry was originally posted at http://aldersprig.dreamwidth.org/959789.html. You can comment here or there.

Fox Hunt, the second of the June Patreon stories, has been posted:

Ariana shifted in her saddle and tried not to look nearly as bored as she felt. This was her mother’s sport and her grandmother’s, not hers, and it bore as much relation to actual tracking as Duck Hunt did to being an army sniper.

Her family still thought it was fun, somehow: they stuck a fox tail on a slave; the slave then dutifully ran through the woods. They sent dogs after him and then, in the grand tradition of the fox hunts, rode the poor schmuck down. Afterwards, he was rewarded, coddled, and praised; the better run, the more praise. Everyone got drunk and praised themselves on how good a hunt it had been.


A Patronage of just $1/month will let you read all Patron-only posts! Check it out!

This entry was originally posted at http://aldersprig.dreamwidth.org/953909.html. You can comment here or there.