In honor of this month’s theme being The Aunt Family, I’ve updated the family tree as I read through the old Eva stories. 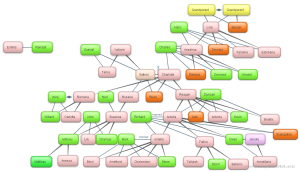 This entry was originally posted at http://aldersprig.dreamwidth.org/991857.html. You can comment here or there.

In the end, it took three guards to hold him down and two more to force the collar around his neck. He broke seventeen bones, only one of them (a pinkie) his own, knocked one of the guards unconscious, and came within a hair’s-breadth of killing a second – and that with his teeth.

Once the collar was on, however, he seemed strangely docile. He stopped fighting the guards at all, allowing them to put on the manacles and shackles, to take what was left of his clothing, and to lock the chains binding him to a loop in the floor. He spoke, quietly and constantly, from the moment the collar locked around his neck, in a language foreign to most of those in the cell.

“Leave us.” One woman had stayed distant from the act of binding him and thus remained unscathed, although a long splatter of blood decorated her robe. “Count to three hundred,” she aimed this order at the sole uninjured guard, “and then send in the attendants.”

The cell door closed behind the last guard. She took the prisoner’s chin in her hand, heedless of the tangle of beard or the trickle of blood. In a voice that would not carry and yet still filled the entire cell, she spoke back to him in the staccato syllables of his own language.

There was no-one to record the conversation, and neither of them would ever speak of it. But when the bath attendants came in with their basins and their scented soaps, they heard him say six words, the only words anyone had ever heard him say in their language.

“My life is in your hands.”

This entry was originally posted at http://aldersprig.dreamwidth.org/991739.html. You can comment here or there.

I’m reading through the posts, but: can you remember if I ever gave Evangaline a profession?

This entry was originally posted at http://aldersprig.dreamwidth.org/991338.html. You can comment here or there.